Batman Tattoos With Their Mystery and Powerful Meanings 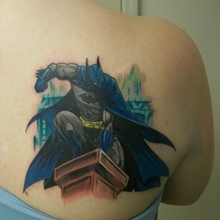 Unless you have been living under a rock for the better part of the last century, then you know when you see that bat-wing logo that it stands for the comic book hero Batman. Since Bruce Wayne’s early days as a comic book hero, he has come to life in a television series and more recently a number of blockbuster movies.

The appeal of Batman is deep, and whether you love his split-personality or the fact he is a dark vigilante at the core, Batman tattoos are a great way to connect your values and beliefs to the dark knight.

Here are some of the ways that you can make the Batman tattoos all your own while still staying true to the power of this caped crusader.

Simple and Powerful at the Core

If you are interested in Batman tattoos, but you want to take it cautiously, you simply can not go wrong with the image of the Batman logo. This black image of the bat is drawn true to form, and it instantly connects with the dark knight.

This is the logo that Batman is summoned with, and it means that trouble is about to be met with a force unlike any other. The popularity in the small bat-wing design is that you can conceal it just above the sleeve line or under the bikini line. The smaller the design, the more questions you leave to those who see it.

These Batman tattoos are representative of someone who is good at the core, has a rough outer shell when needed, and lives their life battling demons.

The Power of the Caped Crusader

Make no mistake about it, if you choose your Batman tattoos based on the face or silhouette of the dark knight, it is going to be easily recognized and make a powerful statement.

Having Batman drawn in dark ink and standing with his menacing glare, symbolic of a powerful force within, someone who is determined, a person who is in a constant battle with things in their life that they refuse to surrender to.

This is an iconic symbol and can be inked in a way to be a reminder for you about the inner battles or demons that you are dealing with on a daily basis.

The Meanings of the Batman Tattoos

Others get their Batman tattoos because they can closely associate with everything the caped crusader stands for. On the one hand, the tattoo for some can be representative of a mighty force, justice, and a symbol of hope.

For others, they prefer to go with the powerful representation this dark vigilante represents. For them, the tattoo is symbolic of courage, dedication, fear, power, and strength. Despite the means in which this hero takes care of business, at the core he is good, and fighting to protect and provide a safer existence for us all.

So you should have a good idea at least now how you can make the Batman tattoos your own. Simple or complex, dark or powerful, you simply can not go wrong when you decide to get inked with some form of the dark knight.