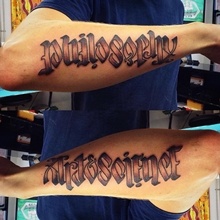 To better understand what the ambigram tattoos are, it is basically a creative way to change the meaning of a word or phrase by inverting, mirroring, or flipping the image. Some prefer to get inked with a single word that looks identical when flipped, while others choose a phrase that reads one way depending on how you look at it.

For some, the allure of the ambigram tattoos is in that you can change the meaning of the word simply by looking at it from a different perspective, contrasting the meaning you originally see.

The Power of the Single Word

The ambigram tattoos allow you to take what seems like a simple word, and make it completely unique by being able to be read in any position. For example, getting inked with the word “father” on the arm, allows the word to be read from the front or the back.

The font is especially key here, because looking at it one way it clearly says the word father without any noticeable additions, but when flipped, it is the exact same word.

What appears to be an obstacle illusion becomes body art that will have people doing double and triple takes to figure out how you were able to make a word look identical when inverted.

Changing the Meaning of a Word

One of the more appealing aspects of the ambigram tattoos is being able to get inked with a single word that changes when inverted. For example, you get inked with what appears to be the word “dream”, but as you flip the word, it magically is transformed into the word “believe”.

The key to the ambigram tattoos is the font and the ability to make one letter symbolize one thing and yet another from the inverted position.

These can be very powerful designs because you can use the word to show that you have an equal opposite or to simply strengthen the association to one another. From any angle, these words can inspire a person each time they look at the design.

Phrases to Live By

If you have a particular phrase that you carry your life by, the ambigram tattoos give you the chance to really create a design that appears impossible on the surface to flip. Take for example the phrase “life is a pain”.

There’s no way that when you flip the words that they can spell out the same phrase, but the ambigram tattoos do just that. By making each letter in a unique manner, the words not only are crystal clear to read when looking at them head on, they take on the exact same appearance when you see them in the mirrored position.

As you can see, the possibilities are endless when it comes to the ambigram tattoos. If you have a word or phrase that you want to incorporate into the design, make certain you are working with a skilled tattoo artist who can maximize the look of these incredibly creative designs.