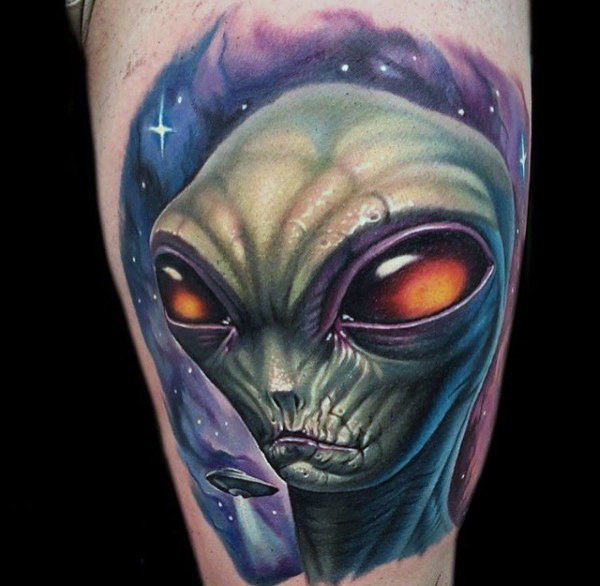 It’s 2020 and still, we are the only signs of life in the universe as we know it. Aliens have been part of our culture for a long time. Some argue that aliens can be traced back all the way to ancient Egyptians.

There are areas across the globe with sites people believed could not have been built by anyone other than aliens. Aliens are mysterious and universal.

Alien tattoos are not exactly mainstream but they do put you in a particular and unique group of tattoo lovers. Some people get tattoos of aliens because of an experience they had. They remember a real alien encounter and truly believe that aliens exist. As they may well do. Others are just fascinated with the unknown and the idea of aliens existing. This is enough motivation get an alien tattoo.

Tattoos can be any shape or size and currently the trend is to tattoo your finger. If you are thinking of getting an alien tattooed onto your finger, then consider getting the head only. The oval face with eyes is minimal and fits perfectly anywhere on any finger,

Keep it black and white or give it a bit of colour and shading. A classic light blue or grey will always work. You can go for some more luminous colours if you’re feeling daring! Consider getting a spaceship, moon, stars or planets on the other fingers to complete the look!

In terms of style, maybe a cartoon spaceship tattoo is good for you. Check out old graphics from the 50’s and 60’s for inspiration. This was the time when UFOs and spaceships were hyped at their most! We suggest that for this tattoo, you go with colour seeing and make the whole thing pop out proudly.

You could also go for an illustration tattoo with a round spaceship and beams coming out of the main section of the ship ready to welcome visitors! This style of tattoo can be black and white with shading.

Want to be more modern? Then check out spaceship tattoos that are framed in a triangle and have a geometric style. You can even draw a person being beamed up to add a bit more character to the image.

Mars Attacks is a cult movie for alien lovers. The movie features aliens coming to Earth for what we think is a peaceful visit. Unfortunately, a peaceful exchange turn into annihilation and all craziness breaks lose. The aliens have a cruel sense of humor and this is reflected in their appearance.

These aliens are tattooed with a huge, oversized brain that is visible. The brain, and the rest of the head, is protected by glass. The alien’s face is similar to a skull with eyes. The brain is highlighted in red and the face is usually green. They eyes pop out and are white. There are two aliens to choose from in the movie. The first is the emperor alien who wears a robe and the other is a soldier with a green one-piece suit.

Another alien that would be an amazing tattoo is the one from the movie “Alien” by Ridley Scott. This alien is big, detailed and scary looking. The science fiction horror movie features the Xenemorph – an alien designed by surrealist painter and sex nightmare machine H.R. Giger.

The movie had such an impact that there was a whole craze of people tattooing the creature on their bodies. You can find it standing on its two feet with a large rounded cone head curving back towards the spine, or it might be positioned circular with its long chain-like tail wrapping around itself like a O.

Another classic style tattoo is an alien face with some writing. The writing usually includes a feature sentence like “we come in peace” or “believe”. You could also check some of your favorite movie or book quotes like “welcome to earth” – Will Smith in Independence Day or “This isn’t a war” – War of the Worlds by H.G Wells.

You can write the sentence around the image in a circular style, underneath or above. Have a good think before you ink the quote!