The Meaning Behind Skeleton Tattoo 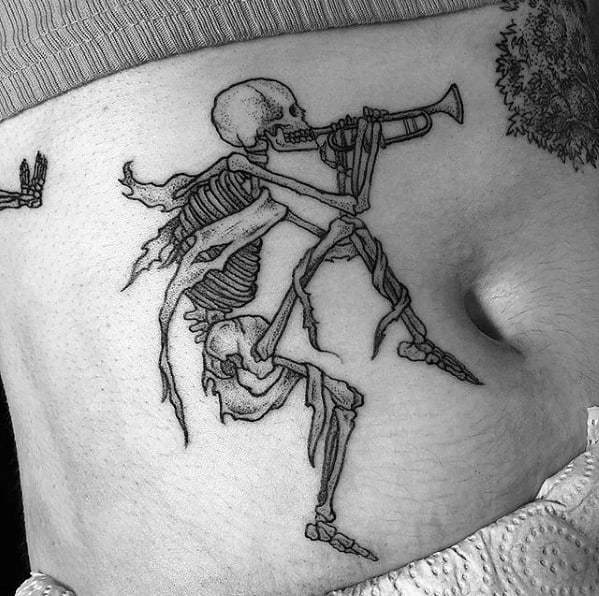 Tattoos are a popular way to give voice to your opinions without saying a word. People wear tattoos on the most visible parts of their bodies so that everyone who sees their tattoos can understand their beliefs and thoughts. Almost every tattoo enthusiast chooses tattoos according to their beliefs and interest. There are only a few people who opt for the images that they like only because of their design. Even a person wearing tons of tattoos have strong faith regarding each tattoo.

Some people also wear tattoos to help themselves fight their fears in life. By daily looking at their own body tags, they start to let go of their fear and worries. Others use tattoos to show their cultural beliefs. No matter what the reason is, tattoos can be highly meaningful and valuable for a person.

Similarly, skulls are a popular form of symbolism in both tattoos and culture. This image can represent both negative and positive, evil and good, and death and life. However, mostly, the skeleton tattoo symbolizes the positive aspects of the negative things.

There are many meanings of this particular symbol which you need to know before getting one. Read the article to understand the symbolism behind the skull tattoo and which type of skeleton will like good on your body.

Skull tattoo’s common meanings are rebirth, survival, power, luck, overcoming adversity, and great lifestyle changes. However, the meaning changes a little bit with the design of the tattoo.

If a tattoo has a gothic design made from dark colors, it represents death. Some people choose it to embrace the dark side stylishly.

In western cultures, these tattoos symbolize toughness, power, and masculinity. They can also portray a dangerous lifestyle, which is the common reason why motorcycle riders wear skull tattoos. On the other hand, animal skull like longhorn skull or bull skull is the favorites of people who work with the land to remind them of farming and rebirth.

A person who has recovered from a trauma or illness can wear a skeleton tattoo to show what they have gone through. Similarly, people who have changed their lives widely, such as beating the addiction of drugs, or stopping committing crimes, use skulls to represent their rebirth positively. Generally, this tattoo is a reminder to the person embracing the idea that they have successfully avoided death.

In Mexican culture, people wear a sugar skull tattoo to remember a deceased loved one positively and meaningfully. It is the main representation of the Day of the Dead. This symbol usually has colorful designs to show the importance of the lost ones. The sugar skull is often placed on the deceased person’s grave so that they can revisit on the Day of the Dead.

While in Christianity, the skulls are the symbols of the concept of eternity. This is because the skull represents the remaining after the soul leaves the body. Japanese also have related different meanings to other cultures about the skulls. They use skull tattoos to remember their ancestors. But this tattoo can also be a symbol of changes in life.

Let’s have a look at some of the most popular skeleton tattoos.

This tattoo belongs to the Mexican culture and symbolizes the Day of the Dead. Interestingly, families combine to make candy skulls on this day. The sugar skull with lots of colorful flowers and butterflies are specifically made to honor the deceased one.

This tattoo is more popular among women as it is colorful and vibrant, and has a feminine nature. Moreover, you can make this tattoo more personalized than any other tattoo because of butterflies and flowers’ designs. These elements make the tattoo more meaningful and can change according to your style and preferences.

This tattoo is usually made to cover the entire arm and sometimes also have designs of pirate’s crossbones. The skull leaves tattoo portrays the wearer has his own rules and choose their own path of life.

You may find this tattoo most interesting because it is a symbol of two different things. This skull has a meaning of death and life, while the rose portrays love and beauty. But together, the rose and skull tattoo represents a struggle – the ugly and the beautiful in hard times of evil versus good.

This human skull tattoo has a simple meaning, which is death. The wearer uses these tattoos to show that he is not scared of death. It also reminds them that the phenomenon of death is inevitable. Therefore, you should always live life to its fullest. The more precise meaning of this tattoo is that the fear of mortality should not impact your life.

This tattoo comes from the older times of art cultures and symbolizes the popular Latin saying “Memento Mori,” which means remembering your own death. Like most of the meanings of skulls, this represents human mortality and emphasizes character growth, which means the death of bad qualities in ourselves.

Placement and Color of the Tattoo

Skeletons are generally tattooed and illustrated in black ink, but if you add some colors in your tattoo, it will look unique and more decorative. Sugar skulls are one of the most colorful skulls and known for being widely colorful and vibrant. However, it also depends on the body part you want to get the sugar skull.

People who have all the basic ink tattoos can consider adding some colors to the skull tattoo to help them brighten the theme. Skeleton tattoos are usually engraved on body parts where you can add lots of detail. The most common placement options are legs, upper arm, forearm, and chest.

Skeleton tattoo may seem horrific or scary, but it has good and positive meanings. This tattoo can help you fight against your fear of death and help you live your life to its fullest.