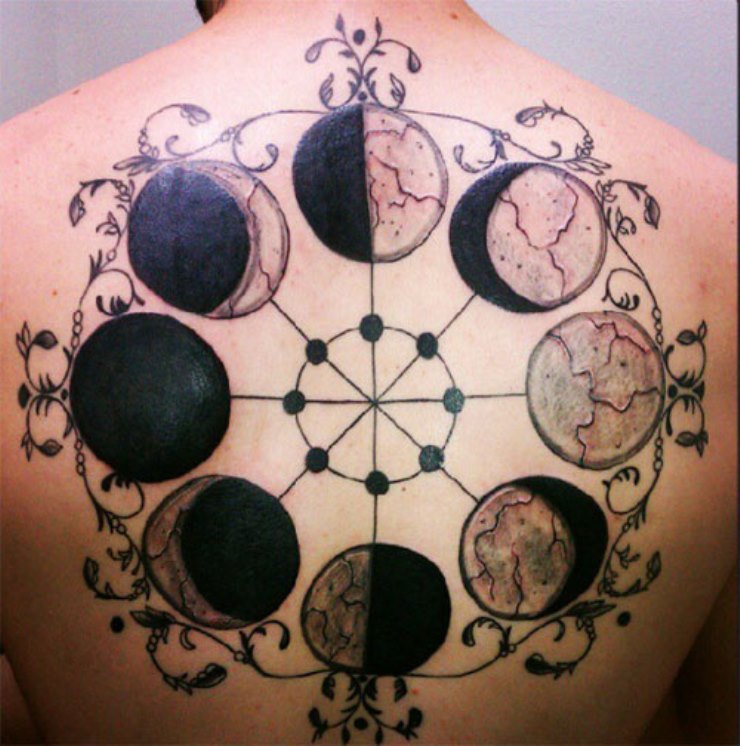 There is one simple truth in life, all is stimulated and touched by the moon. The moon phase tattoo can represent magic, purity, dreams, mystery, shadows, and eternity, similarly to the meanings of celestial and coffin tattoos.

This life affirming symbol appears to always be changing and many people easily associate either their past, their present, or where they are heading by the phases of the moon.

Although symbolizing a consistency in all life here on earth, it also comes with it some very unique and obscure meanings that give it mass appeal.

Here are just a few of the unique moon phase tattoo meanings.

Of the biggest appeals to getting the moon phase tattoo is that is has a unique associate with karma.

This karma can be represented in a number of ways with the tattoo, one being don’t mess with me or karma will equal the playing field.

Perhaps you are living out the rest of your live in a particular manner to balance the positive karma in your life.

Life tends to move in non-linear terms, so this big circle of the moon cycle symbolizes what comes around will certainly go around.

The moon phase tattoo represents the infinite process of regeneration and recycling.

The Women and Moon Association

The moon phase tattoo holds a very unique appeal to many women.

The mystery of this tattoo and the reference to eternity of the moon, allows a woman to closely associate her own inevitable tie to the cycles.

The moon is often referred to as the symbol of fertility and power, and many goddesses in Greek mythology used the moon to convey hidden powers, subtle influences, and secret wisdom.

Women utilize the moon phase tattoo to represent their connection to lunar energy.

Men and the Moon

Ever since the first man landed on the moon, men have also had this unique association with the phases. Dating further back than that, Japanese, African, and Maori tribes associate the male gender with the moon.

It was pivotal for Native American male hunters to utilize the power of the moon to hunt, and lunar gods were associated with many men.

The moon phase tattoo can be a representation of strong yet purifying energy.

Represented as the yin, or the eye that shines through darkness, it brings with it the illuminated vision of spiritual enlightenment.

The moon is also the great protector at night, lighting the way against evil, and helping to keep those warriors on the right path.

The moon phase tattoo also is a call to the animal inside. Many of the greatest animals on the planet come out at night to rule their world.

These nocturnal creatures are able to draw their energy at night from the moon, and wearing the moon phase tattoo symbolizes that a person becomes more efficient and powerful as the sun sets.

The moon moving from one phase to another represents change of one type or another, and eventually we will return from which where we began.