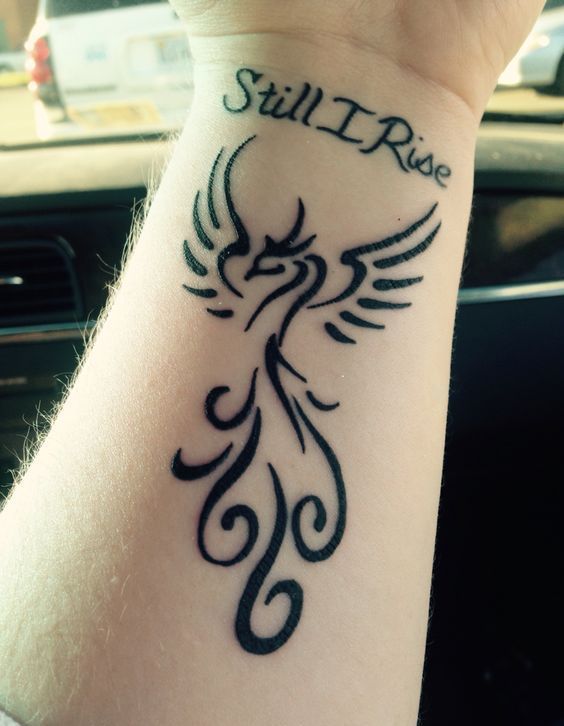 The phoenix is a popular tattoo design for many. It’s mythological meaning holds great power as does the illustration of the bird itself. The colors of orange, yellow and red are a powerful combination and the feathers gives artists a lot to work with in terms of lines and movement.

The phoenix, like the dragon tattoo, is also popular because of its size and shape. It can wrap around the wrist and forearm and be positioned on the back and take over that great space. The phoenix is a symbol that holds great meaning in different cultures. For both Greek and Russians, the bird will burst into flames at the end of its life cycle. From the ashes, it is reborn and starts its life again. In Russia, the phoenix is known as the fire-bird and there is a folk  legend that goes along with the name.

Almost all cultures, including the middle east, ancient Rome, Egyptian and Jewish have the same concept of the bird being consumed by fire and rising from the ashes. For many people, this is a symbol of their own lives. When one chapter ends and another begins, we can feel completely renewed. The Phoenix is a perfect tattoo to represent this stage in our lives.

Parts of the Phoenix Tattoos

It is believed that every section of the phoenix holds an important meaning. For example, the wings represent prosperity and wealth, the head reliability and the body represents kindness. Every part of the Phoenix’s body has a special meaning. But most of all, the phoenix tattoo is a symbol of transformation. For both men and women it can be seen as closing the door to your past and moving forward.

The phoenix tail is one of the most interesting parts and a great area for tattoo artists to work on. In oriental styles, the phoenix tail has a few long feathers and are spaced out between them. In other countries, the phoenix tail looks more like a peacock’s feathers. For most cultures, the tail represents longevity and wealth.

Traditionally, the phoenix is drawn as an oriental, eastern illustration with colors of red, orange and yellow but of course, these days – anything goes. There are phoenix stamps, minimalist styles and watercolor versions of the tattoo.

Still, the most popular is the traditional version of the bird. It is a great piece of art that tattooers can work with fine lines and color saturation. The feathers give the artist the chance to create a lot of depth and movement. Anyone who love detail will be delighted to see a all the work that goes into this tattoo piece.

For a more modern tattoo, less line work and different colors from the usual sun and fire colors are beginning to be popular. Blues, greens and pinks added onto a black piece will look just as good because in the end, it is the black lines that make this tattoo into a real work of art

Harry Potter is one of the biggest selling stories in both books and film. And any fan of the franchise will know that the phoenix plays a huge role. The bird, Fawkes, is in Albus Dumbeldore’s office. It is a loyal creature that is immune to a vicious snake bite. Its tears can also bring living beings back from the brink of death.

Sophie Turner is the star of X Men’s Dark Phoenix. And to follow her own tradition, she has added a new tattoo to symbolize her experience and memory. Drawn by Los Angeles-based tattoo artist Daniel Winter, Sophie turner added a thin lined flame to commemorate her character in the big hit movie.

The star was seen with a huge phoenix tattoo in 2016 while on a trip in Hawaii. At first, Ben Affleck was not too happy about sharing the tattoo which holds a lot of meaning for him, but once the photos were out, he decided to open up more about the piece. Covering his whole back, the phoenix does exactly as its meaning, rises from the ashes. This huge piece in crimson, fiery colours was done just after his divorce with Jennifer garner and during his battle against alcoholism.