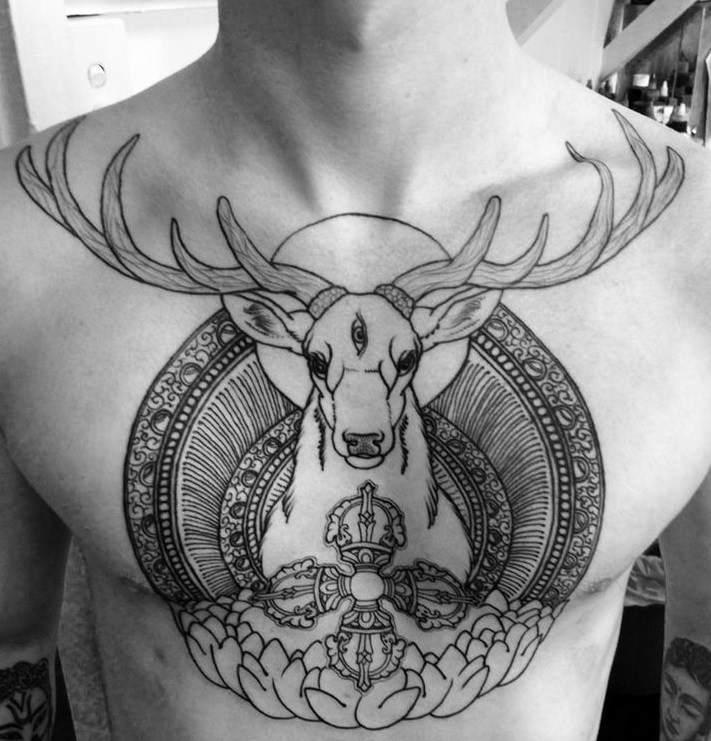 Tattoos across the world have different reasons for being on people’s bodies. For some civilization, the tattoo is a form of communication and describes various aspects of the person. In others, tattoos are a symbol of different teachings. Tibetan tattoos are visual testimonies of the teachings of the Buddha. Sacred statements learned, practiced and mastered over time. The tattoos are a representation of one’s journey to enlightenment, filled with writing, lotuses, demons, and om symbols.  There are three main branches in Buddhism: Theravada, Mahayana & Vajrayana. It has been debated that Vajrayana’s teachings stem from Mahayana.

Theravada: The School Of Elders

Theravada, the School of the Elders, is the world’s oldest surviving Buddhist school. It is the main form of Buddhism practiced in most of southeast Asia, including Burma (Myanmar), Cambodia, Laos, Sri Lanka, and Thailand. Its doctrines are taken from the Pali Tipitaka or Pali Canon and its basic teachings begin with the Four Noble Truths.

Mahayana,  the Great Vehicle, incorporates newer practices that encourage everyone towards Nirvana. It is mainly practised in Nepal, Japan, China, Tibet, and Korea. In general, the two practices are harmonious with each other. They are both based on the Four Noble Truths and the practice of meditation. The main differences between the two branches include the language, the path and communication. Theravada is written in Pali, focuses on individual enlightenment and is done mostly in silent meditation. Mahayana is in Sanskrit, focuses on the Bodhisattva path of encouraging and teaching others, and uses the chanting of mantras and sutras.

Vajrayana: The Way of the Diamond

Vajrayana Buddhism (also known as Tantric Buddhism, Tantrayāna, Esoteric Buddhism, and the Diamond Vehicle) is primarily found in Tibet and Japan. It combines Mahayana ideals with a body of esoteric knowledge and tantric practice. The Vajrayana, literally the “Diamond Vehicle” or the “Thunderbolt Vehicle,” understands itself to be an esoteric form of Mahayana Buddhism with an accelerated path to enlightenment.

According to the Vajrayana tradition, there are certain times when the body and mind are in a very subtle state which can be used by advanced practitioners to transform. These transitional states are during meditation, dreaming, sex, and death.

The practice Vajrayana includes initiations obtained by a student from an appropriate guru. These teachings must be given orally. There is also use of specialized rituals and symbols rooted in Vajrayana cosmology and beliefs:

Vajra as a Symbol

Vajra in the original Sanskrit translates both as “adamantine” and “thunderbolt”. A Buddhist ritual object resembling a small sceptre, it symbolizes the eternal quality of a diamond – an extremely durable substance that cuts but cannot be cut – and the overwhelming force of the thunderbolt. In non-material terms, these qualities represent the resolute spirit and great power. It is a symbolic ritual object that symbolizes both the properties of a diamond (indestructibility) and a thunderbolt (irresistible force).

The Vajra is the male principle that represents method, while the Bell symbolizes the female principle representing compassion. Their interaction leads to enlightenment. The objects are usually made of bronze, vary in size, and have three, five or nine spokes that usually close at each end in a lotus shape. The number of spokes and the way they meet at the ends have numerous symbolic meanings.

Vajra as a Tattoo

The tattoo of this symbol has evolved slightly. Traditionally, the sceptre has two ends with the two lotus flowers. Nowadays, two sceptres crossing each other to double over can be found. The vajra tattoo is not a very common one with only a few people who choose to have it on their skin.

Jahan Yousaf, a celebrity artist, has a modern and personalised version of the tattoo on her right forearm – the Vajra Brush, a work of art by Alex Grey. In this tattoo, the celebrity combined multiple, historical stories of art and knowledge.

The artist explains that the meaning of the vajra paintbrush is “to awaken people to their own essence through the light of higher vision. The vajra is a spiritual device, a thunderbolt sceptre owned by the Hindu god Indra and adopted by the Buddhist sages as a symbol of the diamond-like clarity and brilliance of the mind’s true nature.”