The Pineapple Tattoo: A Symbol Of Friendship And Hospitality 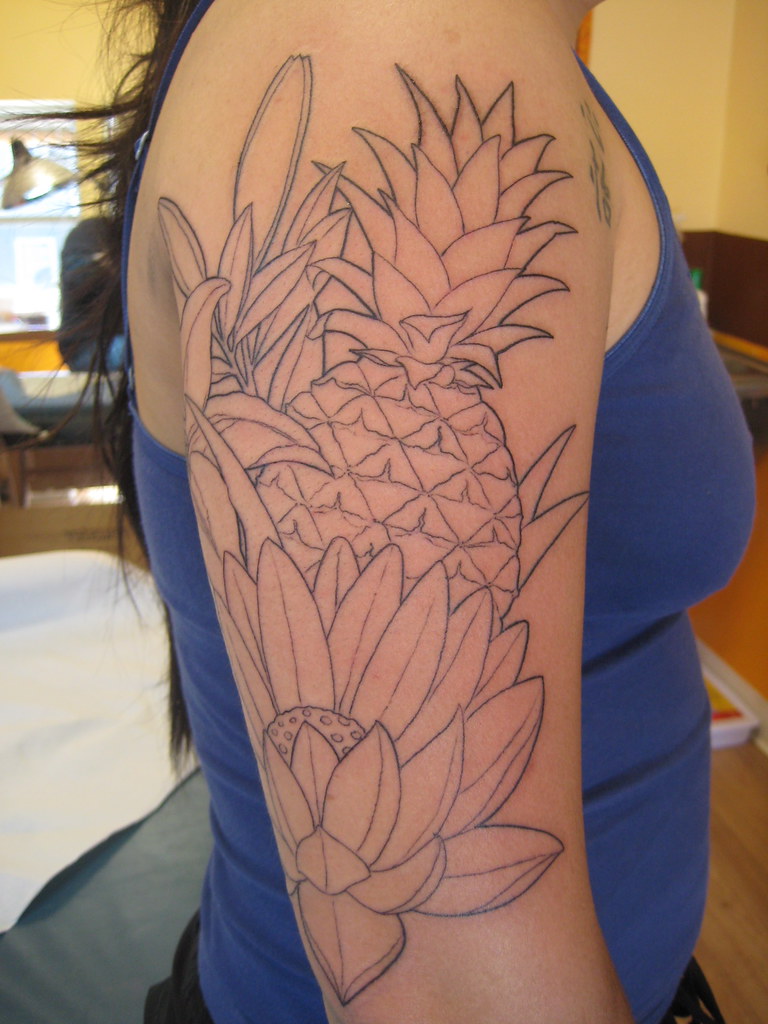 The pineapple is one of the juiciest fruits in the world.  Besides being very tasty, this fruit has the most fascinating look. With its patterned brown skin and a cute green crown of leaves, no wonder that it is so popular as illustration and decoration around the world including as a pineapple tattoo.

Also known as Ananas ( which is part of its botanical name Ananas Comosus), this majestic delicacy has been used as a symbol of friendship and hospitality for centuries.  According to some people, this fruit is considered to be the King of all fruits because of its unique look which contains tough body and crown on the head.

The man who discovered the pineapple was Christopher Columbus who at the end of the 15th century brought it as an exotic gift from the New World.

A brief history of the Pineapple

Christopher Columbus found the pineapple in 1493 on the island of Guadeloupe. Because of its stunning look and taste, it became popular so fast that everyone wanted to have one. Because of its tropical origin, it was very difficult to be grown anywhere in Europe. That was the reason why it was very expensive and mostly owned by rich people who kept it as a home decoration or even a true treasure. They cherish it as something special and many notable people had portraits with it. For example, King  Charles II was presented on a painting with the first pineapple which was grown in England.

The meaning of the Pineapple as a symbol

The pineapple was dubbed a symbol of warmth because it only grew in hot countries and it was defined as a ‘welcome’ fruit. During centuries, people would place it in a special place in their houses as a token of wealth and prosperity. The Native Indians had a deep respect for the pineapple and placed it in front of their homes to welcome guests or new neighbors.  Until today, it still stands as a symbol in many parts of the world, for example, the Hawaiian Islands.

The Pineapple as an inspiration

When it comes to art, the pineapple shape is a pretty good practice for symmetry and complex composition. Many artists play with the skin motif and design amazing illustrations that make it look even more gorgeous. In the past few years, the pineapple also became very popular as a tattoo design among younger people because of its shape and meaning.

As mentioned above, this fruit’s symbolism touched many people’s hearts all over the world. In Spain, there are various gifts with pineapples like bags, wooden carved little sculptures, and different kind of ornaments which are given as a ‘welcome’ gifts to tourists when they visit the country. It is often used as a design in the textile industry for making various patterned clothes, and also we can see many pineapples designed furniture, accessories, and jewelry.

The meaning of the Pineapple Tattoo

Some of them stick to its uniqueness which describes their personality others, ink pineapple tattoos to express their happiness and generous intentions to the world. There are double tattoos for example two friends have the same tattoo as a symbol for their true friendship. This is also popular amongst couples who want to seal their love relationship.

There are thousands of meanings when it comes to a personal relationship with this fruit and we can see all kinds of designs from simple pineapple concepts, abstract pineapples, pineapple tattoos with other items like flowers, skulls, snakes, etc.  The minimal concepts are the most popular, a pineapple on the back of the neck, on the wrist, leg, or behind the ear. They are mostly made in one color and look amazing because of their cute little shape. There are many amazing pineapple tattoos out there in all styles, sizes, and colors. If you are thinking of getting one, maybe this article helps to connect and find yourself in some of the pineapple meanings.  It also reflects a person tough from outside and sweet from inside.

The skull pineapple tattoo is the most inked tattoo amongst men and the meaning behind this is mostly personal. We can assume a lot of connections like for example, the skull is a sign of rebel and the pineapple is the king of fruits so it can means that the person who has this tattoo is not someone you want to mess with. Also, in some countries it is seen as a group or a gang tattoo. On the Hawaiian Islands it is connected with the underworld. So a skull pineapple tattoo sometimes means honoring a lost loved one.

Its kingly shape is totally one of the best choices if you want to ink a fruit tattoo .  It is a sunny and warm symbol, and feels like you are always on vacation.