The Meaning Behind Hippopotamus Tattoo 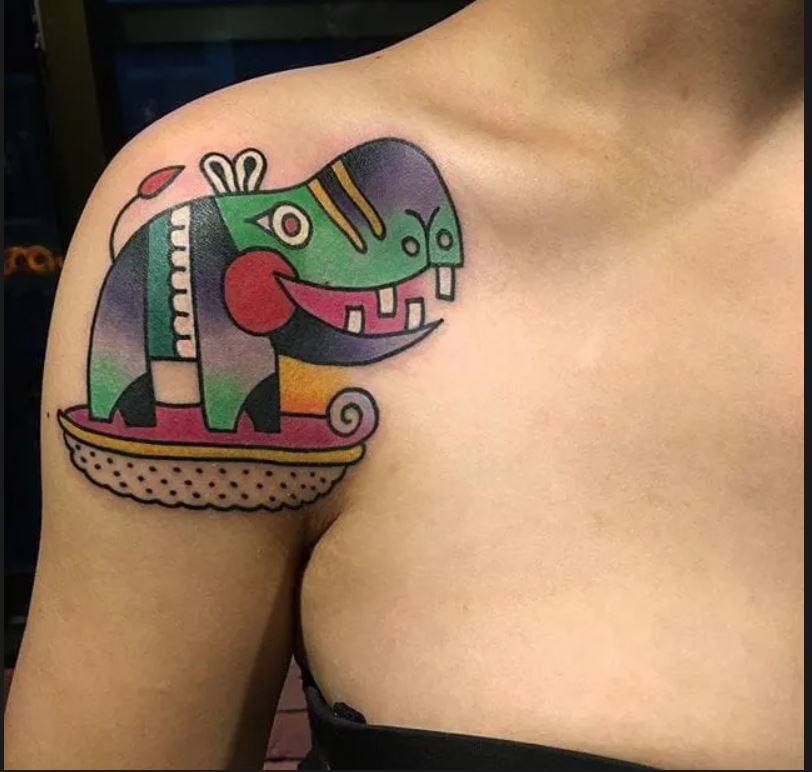 There are a ton of animal lovers that just love their pets or have some undying love for a specific kind of animal. So much so, they even get animal tattoos inked on their bodies. Each animal may have their own meaning and may be attached to the person based on their personal beliefs and a connection the person may have with the animal. In today’s world, people who prefer getting animal tattoos often put a lot of consideration before it and get them as per the meaning the tattoo may hold; though most of these definitions could be assumptions, they are certainly as close as we could get.

For you to understand a certain animal tattoo, we must comprehend the meaning it has or what it actually represents. The most popular animal tattoos include tigers, cheetahs, lions, snakes, etc. Some may even get tattoos of their pets, such as a dog, cat, or fish! But an animal that a lot of people opt for, but you are unfamiliar with, is a hippopotamus tattoo.

The enormous mammal hails from Africa and is often famous for the kind of mouth it has, which is very wide, and its body is so large in size; it often weighs around 1300 kg. It also has small legs but has the ability to run at a fast pace in short distances. Hippos are usually in rivers and lakes, but they can also adapt to out-of-water conditions. They are one of the most aggressive animals out there and can be very unpredictable. It’s no wonder that these creatures are among the most dangerous animals on earth.

However, in terms of tattoos, many people end up getting a hippo inked on themselves. Why? Well, that would depend mainly on a person’s connection to the animal and their beliefs, but that does not mean that the tattoo has a special meaning associated with it. This article will walk you down through all there is that is needed to know about the hippopotamus tattoo.

The hippo tattoo was considered a unique tattoo in the past but has seemingly gained popularity over time. What these tattoos symbolize can be very diverse from one another and how a person would view it.

The Meaning Behind The Hippo Tattoo

In the past, this creature has a very peculiar and special meaning associated with it. People used to hunt hippos, and they were quite fascinated by the large animal. Though they were often hunted for the purpose of consumption, people later begin to develop a spiritual connection to the animal that still goes on till today.

It is regarded that a female hippo is fearless and can do anything in her might to protect her children. The most common meaning of a hippo tattoo and probably the most accurate interpretation of it is the protection of the family, loved ones, and close friends.

Hippos are devoted especially to their families and often represent the symbol of motherhood and the ideology of childbirth.

According to African ancient legends and anecdotes, the noteworthy point is that the culture regards and gives more importance to this magnificent creature than a lion. Another meaning that comes with the hippo is courage and strength. This may be due to the strength a hippo might have to protect her young from all kinds of harm or her devotion to her family that stays firm no matter what happens.

Medicine and healing also have a lot to do with hippos and is another meaning we can interpret from this animal. It is said to have healing powers as well, while another perspective is that the symbol of a hippo is related to obesity, a health condition, or being over-weight.

Hippopotamuses are often a positive symbol and radiate goodness; however, there are also instances with it is related to darkness. During the ancient times of Romans and Greeks, hippos were brought in for gladiator games all the way from Africa.

The famous drug dealer from Columbia, Pablo Escobar, personally owned a collection of hippos. In fact, they helped and were involved in killing Escobar’s enemies too. Since then, it has had a negative influence on the historical western culture and has a dark effect as per some norms.

Hippos are also famous animals in the industry. Whether you talk about pop culture, games, movies, or cartoons, it is not unlikely that you may come across a hippo as a certain character.

Hippo tattoos may come off as very powerful. There are a lot of people who oppose the idea of such a tattoo and may not even choose to wear it, mainly because of the negative reputation it has generated. At the other end of the spectrum, there are people who are enchanted by this animal and have great respect for its symbol and the meaning behind it.

Hippos can be tattooed in all kinds of designs. The most common of them would be a cartoon version of a hippo; it has a light- hearted effect and radiates a positive message. It symbolizes humor and may even take us back to an event of our childhood. The tattoo artist may create the hippo tattoo in a very colorful manner to make it look very adorable and Tumbler- material.

Some people prefer the natural look of the creature. They would ask the tattoo artist to be as realistic when recreating the hippo, so it looks genuine and real.

The hippo tattoo can be inked on; however, a person prefers, the details are always up to the client. You may even choose to have it in black and white or color, depending on your preferences. Similarly, a person may even choose how much to show off of the hippo, whether the entire animal or just the head.

By now, you are probably well aware of hippos and the symbolic meaning they hold in the world of tattoos. Bear in mind that most of these tattoo interpretations come from personal assumptions, and you can only back them with factual evidence sometimes. Other than that, most interpretations derive from personal experience. Everybody’s connection to a tattoo may be different from the other.