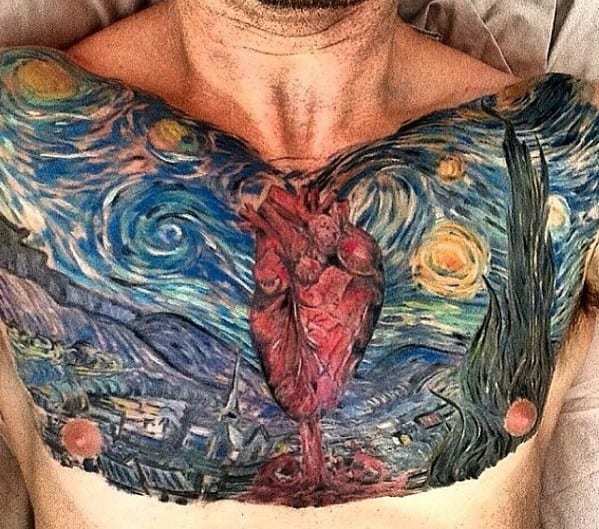 Vincent Van Gogh was one of the most talented and famous artists to have ever walked the face of the earth.  Despite living a life full of struggles, Van Gogh was able to depict his version of the world in poetry and articulated his despairs through his art.

Many people commit to getting a tattoo of the famous Dutch painter’s works of art. It takes a lot of dedication because tattoo artists take hours in concentrating and nailing most of the details. It also takes extreme patience on the client’s part.

The international world of art holds many of Van Gogh’s works in high regard. Some clients may be drawn towards the popular ‘The Night Cafe’, a painting where he claimed to depict an idea of a café being a hideaway to expressing how one truly feels, to go mad, commit a crime, or ruin oneself

Others may be inspired by the black and white painting ‘Skull of a skeleton with burning cigarette’ that has a lot to do with the style, overall result, and effort put into it.

In his (Van Gogh’s) world of art, his pieces are rich in a unique madness and depth. His inspiration consists of daily, dramatic scenic events to an enchanting depiction of sunflower arrangement. His legacy is commemorated by most tattoo artists. Since Van Gogh has several famous paintings, this article particularly will walk you through the details and connection about Van Gogh and his most famous painting, The Starry Night.

Learn the potential meanings behind them and the people who prefer getting it, along with other variations of the painting tattoo. This will bring clarity about what The Starry Night truly means.

The international art community regards The Starry Night as Van Gogh’s most famous painting, which is an oil painted picture on a canvas, dating back to its creation in June 1889. It was a portrait he had created in his asylum room of Saint-Rémy-de-Provence. It depicts a magical view that was visible from his window facing east of his room. This was just prior to the sunrise of the village shown in the background. Since 1941, New York City’s Museum of Modern Art has preserved and showcased this work of art. It is considered as one of the BEST of Van Gogh’s work, which is why most people opt to tattoo this particular painting more often rather than his other work.

The painting was beautifully crafted by one of the most creative minds to have lived in the 1800s. It is a piece that even most tattoo lovers are fond of getting, and it is a special treat for those who are inclined towards art or are creative in nature.

Van Gogh created the painting while he was staying at the ground floor studio of the asylum. What’s shocking to note is that even though he painted while downstairs, the view in the painting was from the upstairs view of his room.

Van Gogh was forbidden to paint in his bedroom. To cope with that, he would create sketches on paper using some ink and charcoal before taking it to his art studio. The view has been depicted cleverly where all weather conditions were covered that comprised of a sunny day, the sunrise, windy and rainy days, moonrise, and even overcast days. To summarize, the mesmerizing scene was painted to combine all elements one would come across during the day time and night time. According to the 21 versions of this painting, 15 of them had cypress trees noticed past a wall far away.

The Meaning Behind The Starry Night Tattoo

The meaning behind it would vary based on a person’s interpretation. Typically, people who tattoo the painting are trying to depict different variations of it in their meaning and as per their own experiences. Most would like to interpret an understanding based on the colors used in addition to the overall painting and compositions that can be seen.

At first glance, you can see the crescent moon along with the stars and spinning clouds that whirl alongside. It is more of an abstract, surreal painting, and in a letter to his brother, he had admitted that he illustrated exaggerations.

Since the painting is a bit hard to comprehend on sight, viewers often have to feel the need to connect the dots in the painting to understand the depth it contains. Similarly, the tattoo is regarded as a symbol flowing as if you were taking the form of a liquid, and to smoothly follow the way of life just as the painting depicts its peculiar flow.

Tattoo variations for the Starry Night

The starry night has different versions based on the tattoo artist. A famous Starry Night tattoo idea is having it on the sleeve area as if the painting itself were a sleeve. Placing the tattoo, there is thought as an ideal place and gives off a vibe as if you were looking out the window due to the round effect on the shoulder caps. The asylum that Van Gogh was in was a monastery previously; thus, the sleeve tattoo has a mosaic window feel, creating a connection to Van Gogh’s life events.

In other examples of the tattoo, the painting takes a circular form. The way this done goes pretty well just as the symbolism of flow, particularly choosing the circular shape, has no lines or ends, thus perfectly depicting the original feel of the painting and its way of expression, making it a preferable combination.

There are a lot of variations of this tattoo, and someone who hails from the art industry or is creative enough might themselves be able to find a way to depict Van Gogh’s work of art in another manner as per their sense of understanding and way of art.