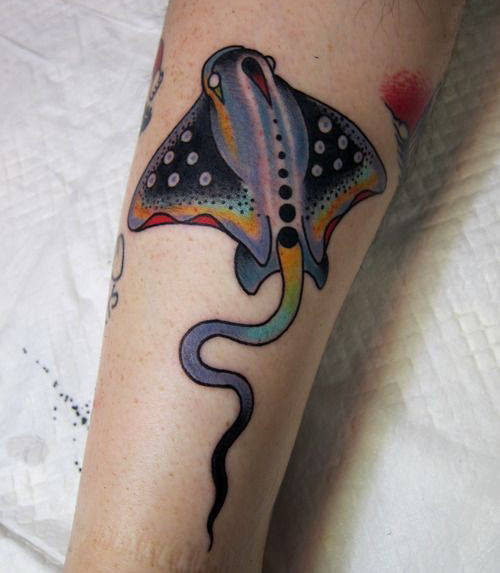 The stingray tattoo has become a popular choice. What was mainly done by French Polynesian islanders has now found its way across to other styles. Geometric, abstract and watercolor stingrays fill up streams on social media channels. But the most widespread style is still its origin – the Oceana.

For over 2000 years, the Oceana region showcases some of the earliest examples of tattooing. The style, which eventually got the name of Tribal Tattoo, is often intricate and meaningful. French Polynesia is a group of islands scattered between Australia and South East Asia. The islanders would sail to and  from each neighbor. The easiest way to know which islander came from was to look at their tattoos. The islands have designed. Almost like a country’s passport symbol.

French Polynesia did not have a lot of written communication. The tattoos would describe a person’s rank, their culture, their personality, the field of work and other details including hobbies. Tribal tattoos generally have geometric patterns and placed on particular areas of the body.

Stingrays are distant cousins of sharks. They have large, flat bodies, two large fins shaped like triangles, gills at their surface, eye at the top and a long tail. Unlike Manta rays, and as the name suggests, stingrays have a sting at the end of their tail. This sting is mostly used as a defence mechanism. In general, these majestic creatures are peaceful. They mostly rest on the seafloor. When they move, they are delicate and agile. The largest stingray can grow to be an amazing 1.98 meters.

Stingrays are chosen as a tattoo to represent cleverness and protection. A lot of women from high-status families would get a tattoo of a stingray. In the film, Moana, a manta ray is used, however, the symbols are closely related. The manta ray also symbolizes guardianship. The stingray, on the other hand, protects with its tail and ability to outwit its prey.

Because of their shape and size, stingrays can easily sit at the bottom of the seabed, chill and wait for prey. Their skin allows them to camouflage in the sand. The technique also allows them to hide from predators. The stingrays can lay still in the same position and never move. This makes it hard for predators, who hunt by detecting movement, to catch them for dinner.

Stingrays tattoos can be interpreted in many ways in relation to their character. They can stay in one place, move with the flow, swim with grace. And when needed, they show characteristics of stealth, coy and survival.