Outstanding Meanings Behind the Panther Tattoo 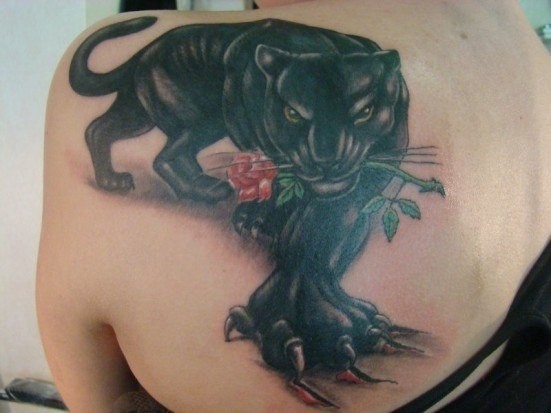 The panther in the wild is a majestic creature, more the reason this animal has grown in popularity as a design for skin art these days.

Left along in their natural habitat, the panther is basically a stalker, working behind the scenes to capture its prey or avoid confrontation with larger animals.

The panther will carefully track the movements of prey, prowling and then ambushing their hunt in a blind-side attack.

These calculating traits are very appealing to those who wear ink, and here are some more of the distinct meanings behind the panther tattoo.

One of the most appealing traits of the panther is something many who have been through struggles love to be associated with.

The panther is one that not too many other creatures would ever mess with in part to their cunning and an advantageous way they calculate every move before acting.

This thinking things out long and hard before making a move appeals to those who love to sit back and take in their surrounds before they make their next move.

Taking in every detail, processing the data, then making a strategic move is often something that appeals to those in the military, but it can also represent those with sharp minds who leave nothing to chance.

The Magic Behind the Panther

There are many people who have a deep connection to the mystical, and the panther is one of those magical creatures that perfectly represents a deeper aspect of magic.

Dating back to ancient times, the panther and their home was considered to be the richest womb of the earth.

Their emerald jungle domain was teeming with life, glistening with vitality, and breathing diversity.

Their home was often refereed to as the gateway to magic, a doorway to exotic realms. Living in the shadows as the secret keeper enhances their popularity as a tattoo design.

Good To Know: What is Vegan Tattoo Ink and What are its Benefits?

Connection With the Night

One of the reasons the panther tattoo continues to grow in popularity is more people are recognizing their own connections to the night.

The black panther is symbolic of the night, where those dark secrets remain safely tucked away and where they can roam just outside of the light.

The color black itself signifies deep secrets, silence, and mystery, perfectly tied together with a creature that is closely related to all those terms, while white tattoo ink represents light and hope.

Today many people associate the panther with honor, excessive power, call-to-action, being silent, being stealth, sorcery, agility, and even stamina.

Those in the military can certainly claim they have most if not all these attributes, and the panther can represent for them any and all of the above.

The Female and the Panther

The popularity of the panther tattoo is not lost on females, in fact, they relate very closely to many of the appealing traits of the panther.

Females utilize the panther tattoo to represent ferocity, patience, protection of their young, sensuality, and even intelligence.

This solitary creature can fend for herself and even raise her cubs all on her own.

They live, they love, and they evolve alone, something that many jilted lovers express in their skin art as a badge to the world that they can and will survive just fine.