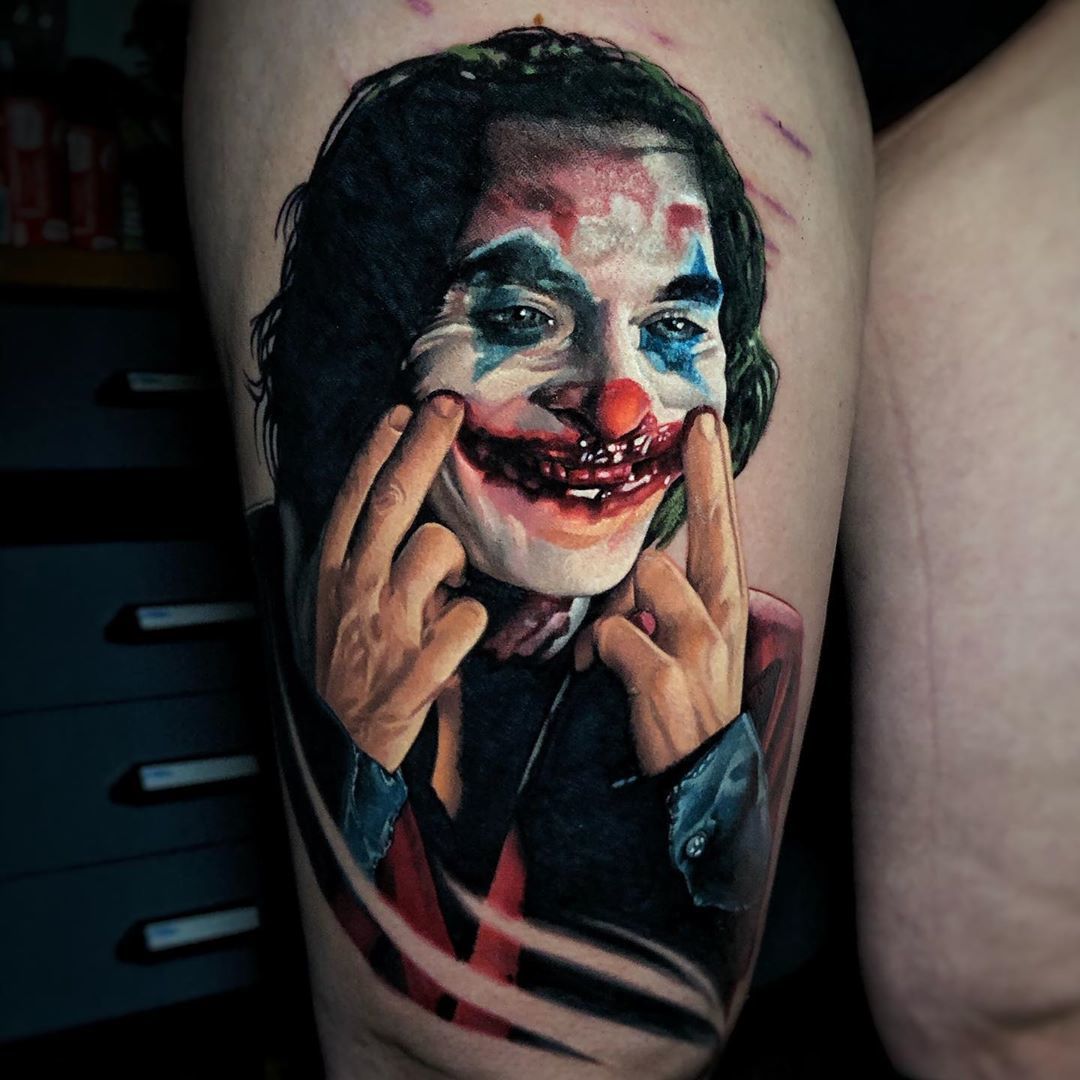 Joker tattoos are bright, bold and controversial. Mostly chosen by men, the tattoo has been gaining new popularity since the movie came out with Joaquin Phoenix. Fans of the joker character have a wide variety of designs to choose from. This includes the classic comic book style, to the movie character played by so many iconic actors.

Dating back further than the DC comics is the joker from tarot cards and playing cards. This card has a long history of symbolism. It is seen as a wild card or “the fool”. The fool can bee seen as new beginnings, new adventures, foolishness and absurdity.

Why a Joker Tattoo?

Joker is one of the main villains in the DC comic series. He is both ingenius and evil, mischievous and playful. Anyone who can relate to these traits would be happy to have a joker face tattooed on their skin.He is the iconic representation of rebellion. He doesn’t answer to anyone and he has a sense of humor.

In playing cards, the joker is unique. It does not fall into any suit, or any pattern. He works solo and is his own character. Anyone who feels that they are introverted, alone and not part of any group can be attracted to this type of tattoo.

Joker Tattoo From The Cards

The joker card tattoo can be exactly as it is called. A card with a joker on it. This is perfect for anyone who loves the strategy that comes with playing a card game. Add some shading to the card to give it more depth. The whole tattoo can be done in black and white with the word Joker written on the side of the card.

This joker looks more like a jester. He wears a hat with bells and shoes that curl at the front. He is usually seen as bouncing or in a playful movement. There is also a frill collar around his neck. Some jokers have a tail to represent that devilish side of the character.

Some people just love those DC comics and have collected all of them. It’s not a surprise that they would get a tattoo of a comic sketched joker. These tattoos are usually bright in colour with fine black line work.

Joker’s hair is wild and green, his face is thin and long with distinct features such as high cheekbones and a thin chin. His smile is bright red with his teeth gleaming through. His face is white, his eye shadow is purple and he wears a purple jacket with a yellow flower at the collar of his suit.

Joker From The Movies

So many jokers to choose from! Jack Nicholson, Jared Letto, Heath Ledger and Joaquin Phoenix have all portrayed the joker in different styles. Jack Nicholson’s Joker wears a hat, Jared Letto’s version has little eye make-up, no eyebrows and a grill on his teeth.

Heath Ledger’s Joker has black all around his eyes and a Mexican style smile with stitches. You can also see his rough make-up and wrinkles. The latest Joker to hit the scene is Joaquin Phoenix. His joker is the closest we have seen to a clown. He has blue diamonds drawn around his eye, high arched red eyebrows, a red tip nose, and an extended smile.

Fans of the movies can choose to do their joker with their favorite quote. Some of these include”Why so serious”  and “ Smile because it confuses people from the Dark Knight.

“Is it just me, or is it getting crazier out there?”, “I used to think my life was a tragedy, but now I see it’s a comedy” and “Put on a happy face” from Joker.

Having a bit of writing underneath, above or circling around a joker tattoo can bring even more meaning to the person who wears it.

Some of the most popular places for a joker tattoo include the forearm, shoulder and collarbone. Most people who get the joker face from the movies place the tattoo on their arm. The arm is a great place to put a face and you can look at the tattoo often!

The comic book style can be placed anywhere where a square block can fit. The calf is a perfect location. It can be wide and short or thin and long. Some people also get the word joker written across the knuckles with one letter assigned to each knuckle.