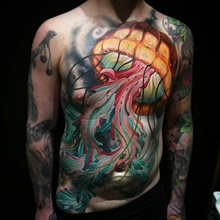 One of the most mysterious of all creatures is the jellyfish. Not considered to be an actual fish, this amazing creature has its very own classification. In addition to it being one of the more mysterious creatures, it is also one of the oldest.

These ancient travelers of the sea don’t utilize a heart, lungs, or gills, their simplistic way of life is simple and complex at the same time. For those who understand the amazing attributes of the jellyfish, this can be one of the more personal and compelling designs for a tattoo.

One of the reasons many people are drawn to the jellyfish tattoos is the fact this sea creature may look calm and docile on the outside, but it does possess a dangerous and powerful side in the way of its poisonous tentacles.

Body ink lovers see this as symbolic of being surprisingly strong, a defender, someone who can take care of themselves and their loved ones too. While you might think you can push this person around, they can sting and can cause you a lot of pain.

Ink lovers who find the attributes of the jellyfish appealing often refer to the fact this ancient sea creature thrives despite being able to see clearly. The jellyfish can usually only detect shadow and light, but they have adapted well to their surroundings and can function perfectly despite their handicap.

Body ink lovers are a rare breed too, and despite their surrounds, the jellyfish for them is symbolic of survival, power, determination, persistence, and an unwillingness to surrender under any conditions.

By all accounts, the jellyfish is an example of being able to survive incredible odds and still perform without issue.

The Meaning of the Jellyfish Tattoo

The jellyfish is symbolic of a creature that has adapted well to its surroundings and thrives in even adverse conditions. Today, people who choose the jellyfish tattoos use it to symbolize tranquility, peacefulness, and a calming presence.

According to Japanese mythology, the jellyfish is used as the servant of the gods. This jellyfish will rely on the currents around it for transitioning through the water. Since the dawn of time this amazing sea creature has not changed much, representative in a tattoo design as someone who is in it for the long haul, adapts to their surroundings and will fight for as long as it takes to survive.

Symbolic of ancient wisdom, the jellyfish has been floating around for millions of years just utilizing the ebb and flow of the earth. That relaxed and calm feature connects with those who have an affinity to nature. These folks, like the jellyfish, have a primal knowledge.

They utilize their instinct to make their way through life and make their way at their own pace. Those who appreciate the magnificence of the world and all its creatures have a deeper association with the jellyfish, a sea creature that was and will be here long after the human race is gone.