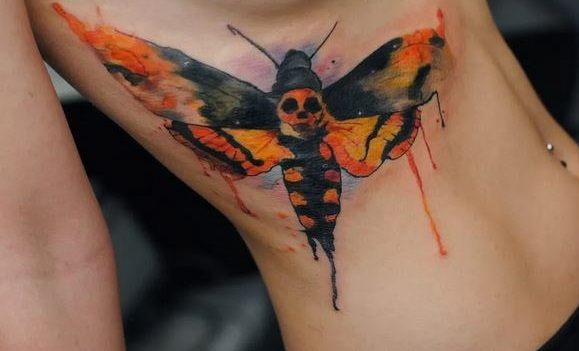 Many people are afraid of insects, but these tiny creatures are popular in the tattoo world. You will find many tattoo buffs with different insect tattoos, including moth. A moth is a species that comes from the butterfly family; however, they have distinct characteristics.

Moth tattoos are quite common and trending as these creatures carry some profound meanings that make your tattoo look more powerful and interesting. Out of all the designs, the best one has got to be the dead moth tattoo. These tattoos bring out the darker side of the moth tattoo, but they hold a lot of realistic meanings, especially mystery.

The dead head moth is also a cultural tattoo and enjoys great importance in many cultures. Hence, people tend to get such unique tattoos to remind or showcase others about the long lost cultures and tribes from around the world. If you want to achieve some mystery in your tattoo, you’ve got to go for a dead head moth tattoo. Read this article further below and come across the main meanings behind dead head moth tattoos, helping you achieve mind-blowing body art.

One of the main and obvious meanings behind a dead head moth tattoo is that it is a symbol of death. Many cultures and civilizations used the dead moth as a sign of death or something dark. If you look at the tattoo design closely, you will see a small skull face in the middle of a dead moth. It connects with the other discreet patterns that make the human skull’s design. This is one of the reasons why some people have a negative view of this tattoo as it includes skulls, usually portraying a dark and negative side.

In many cultures, people refer to these unique beings as the “night creatures” because of the dead head moth’s deadly feature. The meaning showcases that the dead head moth has dark and negative vibes, which could also lead to bad luck for many. Getting this tattoo will represent your perception of certain things and how you see the world struggling with bad vibes and constant negative energy. It also portrays you as a person who has deep and dark thoughts.

Another interesting meaning behind dead head moth tattoos is passion and sensuality. One of the most common features of the dead head moth, and moths in general, is its attraction to light. Light contributes to positive vibes; however, in this tattoo, people see the light as a cause of death for dead head moths. They believe the light may damage or burn moths’ wings.

The dead head moth tat also symbolizes manipulation and trickiness, as moths are one of the few creatures who are easily destroyed by bees. So, in order to save themselves, they have to use their tricks. If you pay attention to this meaning, your tattoo will present you as a tricky person. You can tell the world you are someone who has a game plan to save themselves, especially if you don’t look like people who play mind games.

Besides, the dead head moth tattoos associate with your dreams. Interestingly, many people believe that if you see one in your dream, especially one that goes towards a light source, it means there is something you really want in life. However, you’re too scared to share it with anyone. Sometimes these dreams can also help you find your answers to your questions.

This traditional dead head moth tattoo is one of the most common types you will find in this category. This tattoo includes a black and grey inked dead head moth with interesting details and shading. The credit goes to the skills of the tattoo artist. He has added an eyeball in the human skull’s mouth in this tattoo, which is quite an interesting feature. This tattoo is quite big in size, but you can always adjust it according to your requirements.

These dead head moth tattoo meanings are brilliant and very relatable as well for some people. Other than the meanings, dead moth tattoos come in different designs, giving you more choice because of its versatility. So make sure you properly go through these meanings and express your views through this powerful tattoo. You don’t necessarily have to relate to the meanings. You can simply get this tattoo because of its amazing outlook. Happy tattooing!