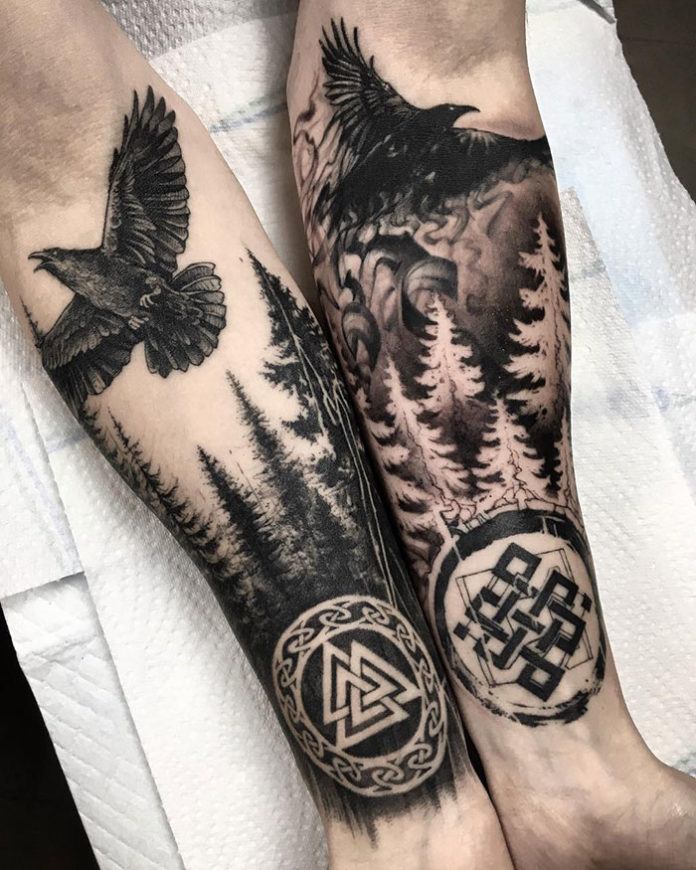 Tattoos are an essential part of many cultures, especially ancient civilizations. One such example is that of Nordic tattoos, which include symbolism and lots of history. These tattoos make up a big part of the Viking culture, which originated in the 8th century. You may have come across many stories and facts in different historical books and forums about them. The Vikings’ rule in the Scandinavian region is a fascinating topic to read about.  There is a lot of history behind these tattoos that feature unique and alluring designs. If you want a tattoo that circles around folklore, you must read further below, as Nordic tattoos may be the perfect choice for you.

Dating back to the 8th century, the Vikings were popular as their warriors would tattoo their entire body with different, symbolic imagery. They would get these tattoos from the tips of their fingers, going all the way to their neck. A lot of historians, such as Ahmed Iban Fadlan, an Arabic scholar in 921 AD, described Viking tattoos as ‘tree-like.’ He said so because their tattoos would comprise large dark green figures, accompanied by different symbols.

The tattoo features a bluish shade, which is said to have come from wood ash. The trees in the tattoo helped portray one of the famous Nordic knotwork tattoos that Vikings would commonly wear. Many people believe that the Vikings would tattoo themselves, but there is not much proof for this.  According to an account by Al-Tartush, an Arab writer, there are many references indicating the painting of faces with ink using blood or ash for ritual purposes.

The face would usually look blue-like and were not permanent. Many historical accounts mention Vikings and Nordic tattoos, but some research and proof are still needed. Regardless, tattooing was a very common practice in the Scandinavian region and across northern Europe. Most historians have uncovered bodies in these regions covered with tattoos. Nordic history is expansive and filled with rich details. It’s a beauty how thousand-year-old tattoos like these are still worn by people today in the 21st century.

5 Popular Nordic Tattoos and Their Meaning

The Valknut tattoos are one of the most common and interesting Nordic tattoos you will come across because of their unique design. This tattoo consists of the mysterious Norse symbol, which includes three triangles interlocking each other. Many archeologists’ accounts have stated that they found these symbols on many Viking runestones and were also carved on different objects found in the Vikings’ ship burials.

Hence, this tattoo includes the meaning of death in battle and symbolizes Odin of the Norse symbol. The word Valknut is a combination of ‘’slain warriors’’ and ’knot,’ from Norse words.

The Yggdrasil tattoo represents the tree of life. This concept symbolizes the frame of the universe and is emblematic of holding the world together. The meaning behind this tattoo is deep and applicable in today’s time, but the design is even more extraordinary as it explains the meaning. The tattoo designs comprise a giant tree connecting nine worlds, keeping the universe together.  Most tattoo artists make this design in black ink, but there are various modern ways to showcase them on your body.

The Vegvisir tattoo consists of the Viking compass, which is believed to have magic. It helps a bearer make his way through bad weather. The tattoo includes unique compass details that will look give you a bold look. Overall, this tattoo symbolizes guidance and protection, reminding you not to lose your path in life.

4. The Helm of Awe Nordic Tattoo

The Helm of Awe Nordic tattoo, also known as Aegishjalmur, is considered to be a magic rune and an important symbol in Norse Mythology. The tattoo comprises a black inked snowflake-like feature consisting of Nordic details and symbols. This tattoo symbolizes protection as the Vikings warriors got this tattoo on their forehead before going into battle. Even if you don’t believe in the themes, such a tattoo will reiterate your interesting personality.

5. The Hammer of Thor Nordic Tattoo

The Hammer of Thor tattoo, also known as the Mjolnir, derives from Norse mythology and gives out a very powerful meaning. You’re probably familiar with the God of thunder Thor, who is part of Marvel’s Avengers. Thor is an important God in Norse Mythology, and what better way to symbolize his strength than get a tattoo of his hammer. By getting this tattoo, you can portray an expression of power, strength, and protection, which is believed he achieved from this hammer.

Where to Showcase Your Nordic Tattoos?

Your Nordic tattoo will only look fantastic if you choose the right placement. After all, this will help you showcase the different imagery and symbolism in the tattoo. Different Nordic tattoos look good in specific areas. If you want to get your tattoo in a place that’s visible to everyone, consider placements such as your arm, sleeve, and neck.

Tattoos such as the Hammer of Thor and The tree of life would look amazing on the arm or full sleeve. You can also consider getting a Nordic tattoo on your thigh, chest, stomach, and legs. You can get your tattoo wherever you like. Just ensure to keep the shape, size, and design in mind. Not to mention, consider how comfortable you are with showing off a tattoo.

Nordic tattoos are ancient, but people still wear them today while incorporating modern features to give them an upgraded look. This can make the tattoo even more unique. If you want a tattoo that features as much history and brilliance as these, you should carefully go through the tattoo types and meanings to get a meaningful Nordic tattoo that you will adore forever.