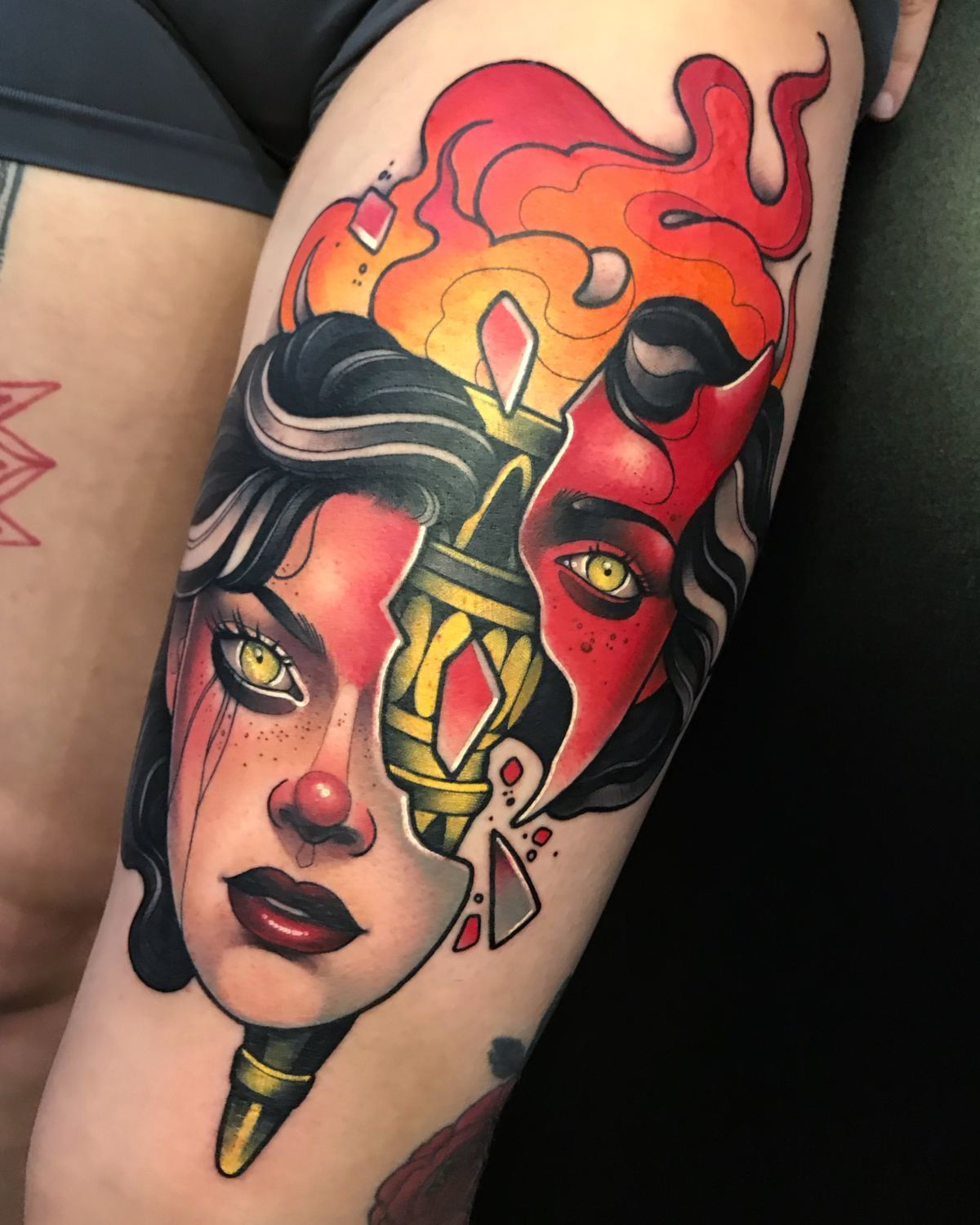 The torch tattoo can represent man’s ability to control fire – one of the game changing events for survival of the fittest. A time when man became enlightened. As a tattoo, a torch also denotes self-confidence, pleasant amusement, favorable business, and a positive omen for business.

Torch and the Olympics

According to the Greek mythology, Prometheus stole fire from god Zeus and gave it as a gift to mortals. In modern days, the meaning of the flame is a symbol of the Olympic message of peace, friendship, tolerance and hope.

Those with a torch tattoo may have actually been part of the relay bringing the fire to the Olympics or they appreciate the meaning that it has.

When people see the flame, they begin to properly realize the Games have arrived and it always brings a good feeling to a nation. The torch relay can really unite the country and help people realise that it’s the whole country that’s hosting the Games, not just the host city.

This is why some torch tattoos can symbolize working together to bring light to others.

Torch and the Statue of Liberty

Some torch tattoo wearers take inspiration from the Statue of Liberty. They are proud to be from America or New York and they believe in what the statues means.

The torch is a symbol of enlightenment. The Statue of Liberty’s torch lights the way to freedom showing us the path to Liberty. Even the Statue’s official name represents her most important symbol “Liberty Enlightening the World”.

Perhaps some tattoo wearers are from descendants of those families who traveled across oceans to find more opportunities in new lands. The tattoo can be seen as a tribute to them. For taking the risk of leaving their home, going through a difficult journey and coming out for the better. They looked for a better life for themselves and their families.

The Inverted Torch Tattoo for Mourning

The Inverted torch is a true symbol of the cemetery and used by people who want a tattoo for remembrance or to put the past behind them.

As a funerary symbol the torch tattoo is symbolic of a life.  As a torch that is inverted and the flame extinguished,represents that life, or part of the tattoo’s wearer’s life is extinguished.

For other tattoo wearers, the inverted torch with a flame that remains burning represents the soul or part of a chapter in life that is still bruning. The flame is then said to be symbolic of the soul. Though the body may fail, it is believed that the soul will continue on.

Torches are definitely versatile when it comes to positive and negative connotations. They are also used to intimidate. We know that they have been used to attack and conjure fear. Think of movies where you have seen this.

In beauty and the beast, villagers come to get the beast from his castle with torches and weapons.  In the Jungle Book, Mowgli attacks Sheer Khan with a stick and a flame. People who are rioting or on strike bring fire with them to create a threatening atmosphere.

Torches tattoos have the power to bring light to darkness, but also to bring fear. As good as fire can be, when not used with good intentions, it can be used as a very powerful, threatening tool.

The Torch Tattoo for Leadership

Torch tattoos can represent leadership and knowledge which is passed on from one to another. Some can hold the light and pass it on while others are the receivers of the light. History and evolution show us that knowledge can only be kept when shared.

In general, torches are placed where there is room for on the canvas. The ideal space is long and does not have to be too wide. The forearm is a popular location to place a torch tattoo. The back, along the spin is also a suitable place.

The torch tattoo has been more popular with men than women, but as traditional styles take a step into the future, women have also added an elegance to the image. Women see the torch tattoo as a symbol of holding their own light and gaining their own independence.