Find Out What The Aztec Snake Tattoo Means 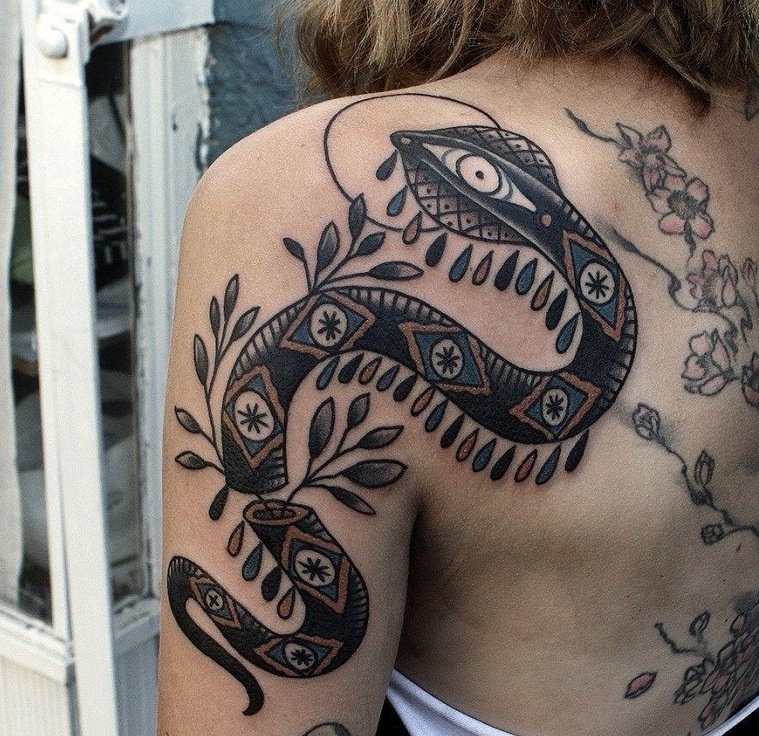 Tribal tattoos always have a way of helping you pay tribute to cultural heritage. One of the oldest and greatest tribes you may have heard about is the Aztecs, who came from the South American region. You will find many symbols and traditions among the Aztecs, making it all the more exciting to incorporate these designs. The variety gives you the freedom to use your creativity, as there is so much you can include. Thus, Aztec tattoo ideas come with different symbols and animals.

One of the most common Aztec tattoos is the Aztec Snake or serpent tattoo, also known as the Quetzalcoatl (the feathered serpent). The Aztecs followed a specific calendar system that plays an important role in the meaning behind your Aztec tattoo designs. Aztec snake tattoos have more masculine features and look good on men. However, there is no restriction for women, and they can also try out these tattoos as well. Not to mention, these tattoos have some profound meanings that many people can find relatable.

If you want to learn more about the meaning behind Aztec tattoos and gain some inspo for your next tattoo, you must further read this article.

The Meaning Behind Aztec Snake Tattoos

The Aztec snake tattoo is one of the most popular types of Aztec tattoos. The serpent, also known as the Quetzalcoatl, was an important symbol in their culture. The Aztec snake tattoo symbolizes the Snake God who the Aztecs idolized. They believed in many Gods and gave much respect and adoration to them. Hence tattoos such as this would be a big thing for the Aztecs, and they would get it to portray themselves as warriors.

Aztec men who fought in wars would especially get this tattoo. This tattoo also represents the eastern direction and the fifth day on the Aztec calendar. While you may not be able to relate to this meaning in today’s time, the design of the Aztec Snake is quite interesting. It will help you achieve some amazing body art.

The Aztec Snake is just one amazing element from the Aztec tattoo collection. Many other meanings revolve around different Aztec tattoos. One of the main meanings that Aztec tattoos represent is warfare; the snake symbolizes a warrior. The Aztecs would wear tattoos to distinguish themselves from the rest as true warriors. Some would get tattoos to honor their different gods, such as the Serpent God and many others.

The Aztec eagle tattoo holds many other meanings, such as it symbolizes strength, power, courage, and bravery. These are some attributes that men love showcasing in their tattoos. It will also help remind them that no matter what they’re going through, deep down, they have the characteristics to overcome the challenges. This tattoo may help them discover that.

The gods of the sun and moon were one of the most important Gods to the Aztecs as they symbolized their everyday workings. The Sun God, known as Oll, represented all the earthly and universal elements such as earthquakes, rain, wind, and water. The Aztec Moon God tattoo also has an interesting history and has a whole story. According to Aztecs, the Moon God was supposed to become the Sun God at first. But due to its failure, he instead became the Moon God. These stories are hard to relate to today, but they come with lots of mystery and history. This is something many feel like showcasing in their tattoos.

As mentioned earlier, Aztec tattoos depict different meanings filled with culture and mystery. Even if you don’t click with these meanings behind the Aztec snake tattoos, the amazing patterns and designs will compel you to get this tattoo instantly.

The Aztec snake tattoos appear in different designs and shapes with some unique features. To serve justice to its majestic tattoo features, you must choose the right placement for this thrilling tattoo. The best placements for a whole Aztec snake tattoo would be your full arm, forearm, chest, shoulders, and back. Some people like getting only the face of the snake, which looks good on the arm, back, and side of your upper chest.

The swirly bodily features of the snake go well on the arm and create the perfect motion. When it comes to choosing a placement, it can get a bit overwhelming. But the best way to get any confusion out of the way is by first selecting your Aztec snake tattoo. And then, according to that, you can choose the perfect placement. Aztec snake tattoos help give out a very royal feel; hence, no matter where you get it tatted on, it will still look amazing as ever.

Some of these tattoos also have two-faced snakes at both the ends of the tail. These give out a very mythical feature. Even if you can’t relate to the meaning behind Aztec snake tattoos, you can still go for its amazing design and appearance to achieve some mind-blowing body art.

Hopefully, the meanings of the Aztec snake tattoo have helped you and made your tattoo decision easier. These meanings are traditional and not applicable in today’s world, but that’s the beauty of these tattoos. Even though this tribe existed hundreds of years ago, people still show interest in it by getting tattoos. These showcase the rich history and culture of the Aztec tribe. So go through these meanings carefully and achieve some spectacular body art.