46 Evil Clown Tattoos and Their Mischievous and Dark Meanings 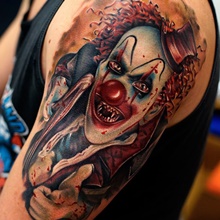 Clowns have been a part of culture dating back many centuries. In the days of royal courts, the clowns were known as jesters, and they could be easily spotted by their colorful costumes and they antics designed to make the audience laugh.

Many took this to the extreme, ridiculing the kings and queens that they were supposed to be entertaining, only to find that they wound up getting their heads taken off for pushing things too far.

Today, evil clown tattoos are all the rage because they instill more than fear in people who may already have this trepidation about the clowns.

The History of the Clowns

The court jester was brought into the king’s court to help bring a fun and playful side to the days’ affairs. It was common for a jester to be summoned to the court to help improve morale in a group. Those clowns would use any antics to try and get a response from the crowds, and if their tactics were unsuccessful they would meet a certain death.

Although those court jesters appeared on the surface to enjoy entertaining royalty, many times their evil sides would spill over as they mocked the court and all who were associated with it, including the king and queen.

These clowns are representative of jealousy, mockery, and deception.

Hatred for Everything Clowns

Some people just have this unrivaled fear of clowns, and they are especially troubled when the clown takes on an evil persona. Today, many body art lovers enjoy the idea of causing their own mayhem by getting inked with the evil clown tattoos.

These designs can be depicted to show the clown looking mad or sad, both with their own twist of evil just under the surface. The killer clown and the gangster clown are all the rage right now because they play on the emotions of people who despise the clown, to begin with, not add in a fearful element, and the tattoo takes on a life of its own.

The meanings associated with the evil clown tattoos run the full spectrum of emotions. While they may be smiling on the surface to portray joy, happiness, laughter, and playfulness, just below the surface they represent despair, evil, unhappiness, misery, and depression.

A person who has made a lot of poor choices in their life could get the evil clown tattoos because for them it represents mistakes, incarceration, and having lived a difficult life on the streets.

Others just love the fact the image scares those who are terrified of anything clowns, and they like the ability to have some power to control from afar.

These tattoo designs are growing in popularity with both men and women. These are certainly images where the tattoo artist can have free reign to use vibrant colors that draw in even more attention.