The Meaning Behind Blood Tattoo 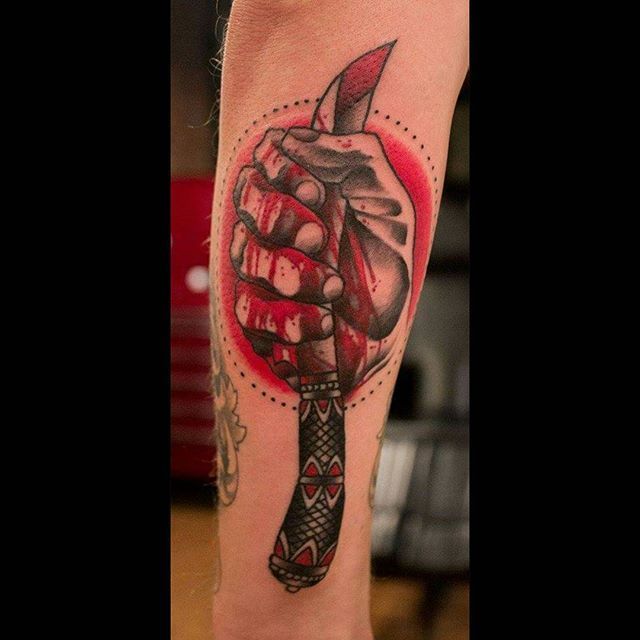 Tattoos are a thing; they’ve been one since they were discovered on Otzi the Iceman’s body between 3100BC -3370BC. People worldwide are fond of tattooing their skin, whether it’s their arm, their neck, their leg, or sometimes even their face. It’s not just goths who are into tattoos, and each one could symbolize something different from each other.

Getting a tattoo sure is a scary experience, but it’s worth the pain for most people. Some of them like to believe their body is a canvas and use tattoos to express their personality, feelings, or any personal experiences they might have had in life.

Their colors, shapes, and patterns could all be a form of depicting emotions and memories. Any body art is regarded as a way of symbolizing a connection with a particular incident or person in life. It could be a part of the person’s past or even the present.

Some people like to use their body as a memorial and have a tattoo made for every meaningful person in their life that passed away. While this is somewhat more private to the owner, some tattoos common tattoos are more generalized with different meanings and are often opinionated.

What are blood tattoos?

There are all kinds of tattoos you might come across, and yes, not every one is meaningful. Some of them may be used to represent a fandom or even just because a person might think that a significant symbol looks good tattooed to them.

Some people opt for ‘blood tattoos,’ which is ironic considering you literally get cut through your skin while getting this tattoo. However, it’s not what you think it is. It is the intentional involvement of blood in a symbol a person may choose as per their liking.

This article will walk you through some of the faces attached to the blood tattoo, and we’ll go in-depth, interpret, and explore the true meaning behind most of these specific yet diverse tattoos.

On their own, tattoos can be quite amusing, to say the very least, let alone tattoos with blood! Blood tattoos are prone to looking unusual and can be quite shocking for some. The tattoos are carefully drawn and colored in with ink that matches the natural shades of blood for a more realistic effect. For tattoo designs with blood, tattoo artists tend to use red for most of it and rarely incorporate any bluish or purplish tones to their work of art.

The design may also be in the form of a bloody text. For instance, the phrase ‘blood for blood’ depicts the tattoo owner’s way of seeking revenge for any particular incident or from a person they might have come across in their life. They are keen and determined to catch the guilty and not spare them without a penalty or a punishment. This is a very famous design chosen by many tattoo fans into the whole blood, goth, and cult culture.

Such designs are mostly opted for by men relative to females. Guy’s may also use this as a way of showing strength, masculinity, and toughness. Some blood tattoos may be mixed with a warrior spirit symbol and depict a similar expression and a strong desire to take revenge or avenge somebody else’s blood. The blood may be shown in the form of a few drops or a ‘drip’ pattern. A soldier might opt for such a tattoo as he may feel a personal connection to it. Similarly, tattoo fans obsessed with the vampire fandom might even get a blood tattoo similar to this.

A bleeding bull tattoo is somewhat similar to a phoenix as it expresses rebirth and a flash of energy. This is a historical tattoo that dates back to the ancient Romans who regarded bull blood as an element expressing health, importance, or vitality. Like this tattoo, many other tattoos may have some historical kind of belief attached to it, and maybe a practice passed down through the generations and may inspire the young to follow in the footsteps of their cultural beliefs.

This is related to a lover’s love story in most cases. A tattoo that shows a rose with blood flowing down from it indicates a kind of love that has not been returned the same way. Sometimes people would link this tattoo to the sad story inspired by the legendary Ottoman anecdote where the nightingale fell in love with an enchanting rose and persistently sang songs for it. Like every other love story, eventually, the rose pricked the nightingale, and the hopeless romantic died without his love being uncalled for or requited back to him.

This one screams goth in every way. Such tattoos are made by drawing blood drops that happen to be very realistic and dark in color. They often drip in a way that seeps through the seams of the skin or an organ. The tattoo might even depict the tattoo owner’s mental disorder (if any). Though such tattoos are not something out of the ordinary and rarely depict uniqueness or stand out from the crowd.

The kinds of tattoos people might have would solely depend on their liking and personal preference. Blood tattoos are certainly some that have people’s heads turning and carry different opinions from all kinds of passerby’s. There are several other types of blood tattoos that include people’s blood types and RH factor, realistic, gut-wrenching drawings, passion, and even fiction themes such as vampire and Dracula.

An interpretation behind a tattoo is mainly subjective to a person’s understanding. Only the owner of the tattoo would understand the connection and the true deep meaning behind it. This article is just a general view of how most blood tattoos are seen, and in no way does it seek to misunderstand tattoos for their actual meanings.