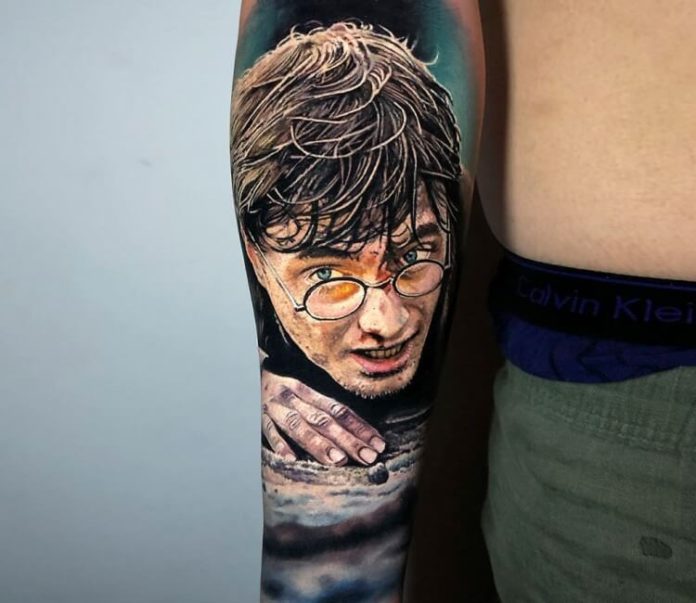 The first Harry Potter book came out in 1997, and the series has become a crowd favorite ever since. Not to forget, the fans only seemed to increase dramatically as the movies started coming out from November 2001 onwards. While it was a hot topic back in the years 1997 and 2001, the Harry Potter world remains a huge part of the lives of many.

It is no surprise that fans’ love affair with the fantasy series goes beyond watching the movies or reading the books countless times. You may have noticed the Harry Potter elements being a permanent part of the bodies of many fans. If you are a fan, you may have also wanted to get the magical world’s elements inked. In this post, you can learn all there is to know about different Harry Potter tattoos, ideas, meanings, and placements.

If you have read or watched the Harry Potter series, you must know that it is no less than an addiction. Our love for the series only continues to grow as we move from one book or part to the next. The elements and characters slowly become a part of you and are one of the most important ones before you know it.

People love to get tatted with elements, things that impact their lives in any way. This is exactly what started the Harry Potter tattoos trend some years back. Not to mention, it is still as trendy among the older as well as the new generation.

The Harry Potter tattoos are varied, just like the wizarding world of magic. The amazing tattoos look just as good and eye-catching in any design, style, shape, size, and color. Some people are into the fantastic beasty three-headed dog named fluffy, while others prefer the subtle Harry Potter glasses and scar tattoo.

However, tattoos hold more importance for the meanings they hold for people. Different styles and art forms reflect different personalities. On the other hand, the tattoo designs, sizes, and ideas are an indication of how certain elements and characters affects the life of the inked person.

Popular Tattoo Design Ideas for Everyone

All tattoo enthusiasts or newbies have different reasons for getting inked. You may want to get a Harry Potter-related tattoo to show how much you love the series. Or, you may want to make a certain element from the series a permanent part of your appearance because of how it changed your life. In any case, it is important that you know the meanings of the different tattoo designs. Not to forget, you must also know what body areas best suit the different tattoo designs.

One of the things that readers and watchers observed and adapted from the famous Harry Potter series is the quotes and dialogues. It is not an unknown fact that words tend to touch lives and make huge impacts. You may have noticed that the series contains numerous heart-touching lines.

Not only do people like to ink themselves with one-worders like ‘Always,’ but some also have entire passages tatted. You may be impressed by the wise benedictions of Dumbledore or became a fan during the solemn oath of Marauder’s Map. In any case, script harry potter tattoos look cool and don’t seem to go out of trend.

Placement: A medium-sized script tattoo looks great on the arm or back. However, one-liners and single words can also go on your collarbone, wrist, or the side of your neck.

The sorting hat only played a small part at the beginning of the series. However, it is one thing that hugely impacted the roles of the leading characters, Harry, Hermione, and Ron. The sorting hat is responsible for the important and exceptional choice regarding their lives in the magic world of wizardry. After all, the three wouldn’t be the greatest of their houses without the hat.

If you are one that looks too closely and observes how the tiniest things make huge impacts, this may be your pick. Moreover, the sorting hat is a tattoo design that looks stunning and allows you to be creative the way you wish. You can choose your sorting hat to be intricately detailed or let it be simple and easy. It is also extremely easy to work this tattoo design in any tattoo style.

Placement: The sorting hat tattoo design is best to be inked on the upper arm, the inside of the forearm, or even your legs.

Are you a Ravenclaw, Slytherin, Gryffindor, or Hufflepuff? Whatever your house may be, the obsession with your Hogwarts house is one that never goes away. If you are a Harry Potter fan that is proud of their house, why not get it inked?

The Hogwarts house tattoo design is a popular one not only because it represents your house but also because it is one of the coolest tattoo designs. You can get as creative as you want with the house. , adding other details from the series or even a specialty of the house. For instance, you can add the Slytherin ring to your Slytherin house tattoo. Not to mention, you can also get a tattoo that represents all four of the Hogwarts houses. Or, house tattoos are also popular among friendship tattoos.

Placement: This tattoo looks awesome on the inside of your forearm if you and your friends are getting your houses inked together. Not to forget, you can never go wrong with this tattoo design in tiny size on your wrist or ankle as well.

Expressing your love for the Harry Potter series should have no boundaries. So, if you want to demonstrate it through your body, we suggest that you go ahead. This is because Harry Potter tattoos make for some of the best tattoos of all time. They not only offer you freedom for creativity, but you can also reflect your personality by working it into any tattoo style, including line work, shades, or watercolors. We have mentioned some of the most popular Harry Potter designs, along with the ideal placement options. Other design ideas include Marauder’s map, three stars, wand, Hogwarts train platform number, Harry’s glasses and scars, deathly hallow’s symbol, and the flying key.